In June, Mary and I had the opportunity to meet up with Melanie at her main field site, Knight Inlet Lodge. The lodge is located in Glendale Cove, along the Knight Inlet in southwest British Columbia. We stayed at the lodge for 3 days and 2 nights (June 17-19) to sync up with Melanie on the BearID Project, to visit some of the camera trap installations, and to see some brown bears! 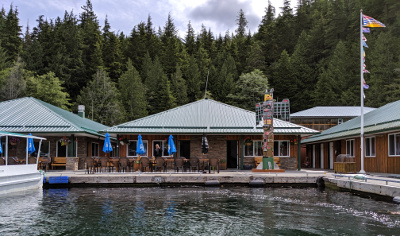 The Knight Inlet Lodge is a great place to see brown bears! It is a completely floating facility, anchored near one shore of Glendale Cove. The lodge is only accessible by float plane or by sea. Apparently, most of the floating lodge was purchased from a fishing lodge near Vancouver Island and towed to its current location in 2012. There was a lodge in the Glendale Cove location prior to 2012, but it burned down due to a careless guest smoking a cigarette.

In 2017, the lodge was purchased by the Nanwakolas Council, a First Nations controlled entity mandated with securing economic development opportunities for the benefit of its five limited partner First Nations. One of the First Nations groups also maintain a set of trail cameras on their lands, and provide data to Melanie for her research and for the BearID Project.

For our first day at the lodge we had a fairly fixed schedule. We arrived by float plane from Campbell River in the late morning. We immediately went on a tour of the facilities while the staff handled luggage and departing guests. In June, the bears are mainly using the estuary, so the next step was an introductory estuary tour on a small boat. The boat holds up to 6 guests and a guide. The guide took us across the cove where we found Lenore and her 2 yearling cubs. After watching them forage along the shore for a while, we moved further toward the mouth of the cove where we found Lillian. After about an hour on the estuary, we headed back at the lodge just in time for lunch. After lunch we went out on a larger boat for a Knight Inlet cruise. We sped up the inlet, stopping at waterfalls and various sites along the way. 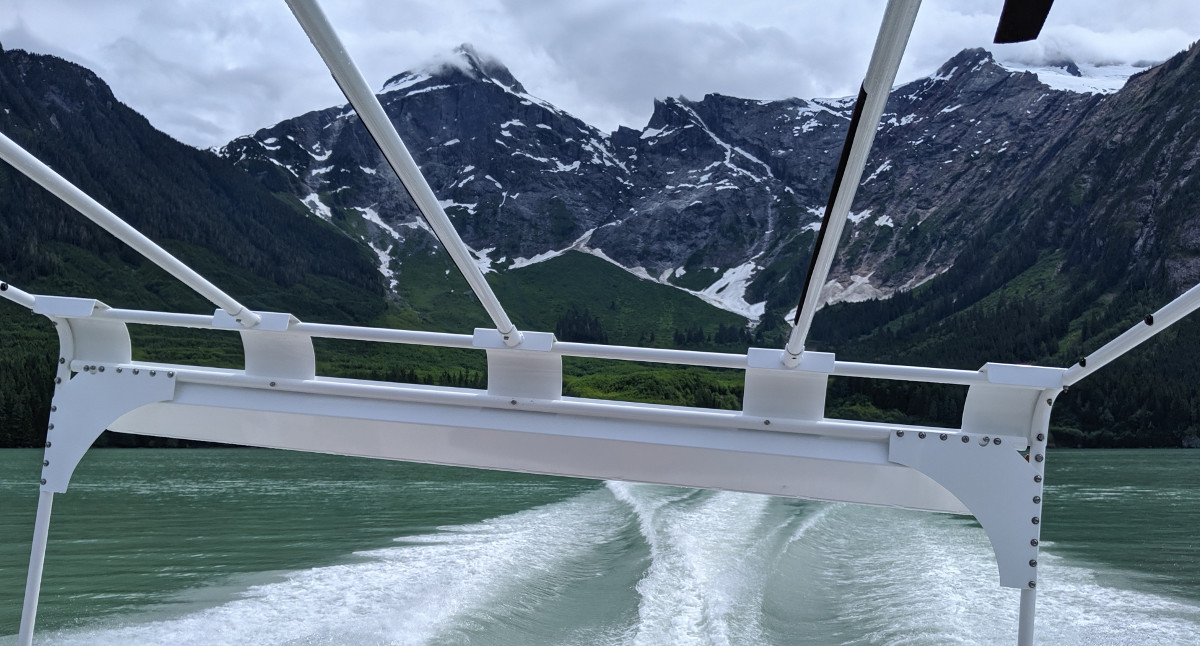 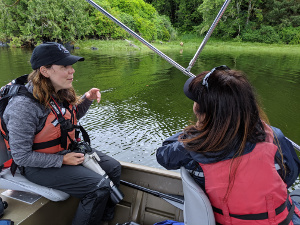 After cruising the inlet, we had a short break back at the lodge. Then we were back on the estuary looking for bears. Melanie was able to join our tour to provide some additional commentary. She knows the bears quite well and was able to tell us some of their histories. In a little under 2 hours we saw Lenore and cubs, Lillian, Flora, Amber and Bella. We also saw a black bear that was hanging out near the lodge. Back at the lodge, we had time to freshen up before happy hour. During happy hour, you have a chance to select your activities for the next day. Besides bear viewing, activities include boat tours of Knight Inlet, whale watching, kayaking and various walking tours. Happy hour was followed by a very nice dinner, including wine and desert. After dinner every night, there is a evening presentation from one of the guides. 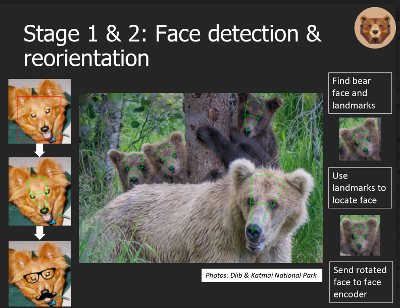 On this particular evening, we were the presenters. Melanie, Mary and I gave an overview of the BearID Project to the staff and guests. Melanie described the need for monitoring bear populations and the challenges with monitoring them non-invasively. She described how she utilizes camera traps to help with this task, but that consistently identifying bears in the videos is difficult. This is when we introduced the BearID application. At this point, I gave a high level overview of machine learning and explained the process we use in the BearID application. I’m not sure if everyone was able to follow along, but at least they enjoyed the photos and the clips from camera traps. 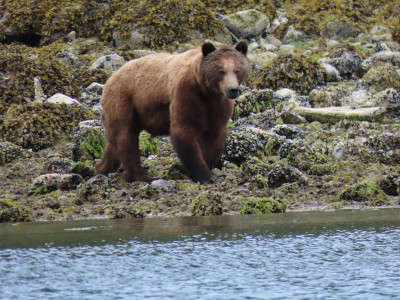 On our second morning, we went out on the estuary tour with our guide, Anna. The tide was low and we saw a number of bears foraging for mollusks and crustaceans among the rocks and on pilings. Once again we saw Lenore and her cubs. We saw Toffee, the only male we saw on the trip, who was seemingly being followed by both Lillian and Flora. Lenore was very mindful of Toffee. Every time he would come her way, she and the cubs would scamper away. Further along the estuary we also ran across Cleo foraging along the shoreline.

After the morning tour, Mary and I met with Melanie to discuss our project and the paper we are planning to write. After lunch, Melanie took us to see some of the camera trap setups. We took a boat across the cove to where they have some trucks and a mini bus. Melanie took us in a research truck.

Riding in the research truck 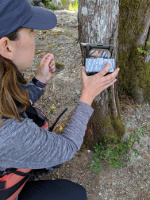 Many of the camera traps are placed near the road or along heavily traveled bear trails. A couple are on bridges which cross the river and creeks. We stopped at some of the cameras along the road to swap out the memory cards and batteries. 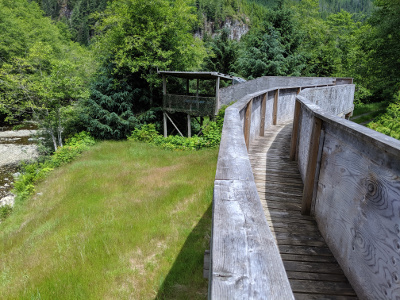 We continued along the road until we reached the viewing platform which is near where the bears fish for salmon on the Glendale River. The platform is not in use this early in the season as the salmon hadn’t started running there yet. It is similar to how I imagine the one at Brooks Falls must be. There are also a couple of viewing areas along the road up to the main platform. 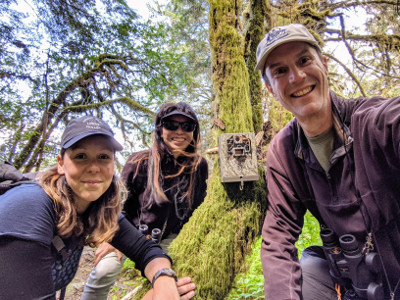 On the way back down from the viewing platform to the inlet, we stopped at a few more camera sites. Some of the cameras were a couple hundred yards from the road. We had to walk along the bear trails to get to them. Fortunately we didn’t encounter any of the bears while we were out. Melanie also showed us some hair snares, which are basically a few strands of barbed wire wrapped around or strung between trees. The purpose of these snares is to catch hair samples from passing bears which can then be used for DNA testing.

We were back at the lodge in time for happy hour and dinner. On the way from dinner to the nightly presentation, we saw another black bear behind the lodge. The presentation was about tree communication via a fungal network under the ground (see this related story from the BBC). Even though it was still light after the presentation, we were ready to hit the hay. After all, we would have another early start on our third and final day at Knight Inlet. 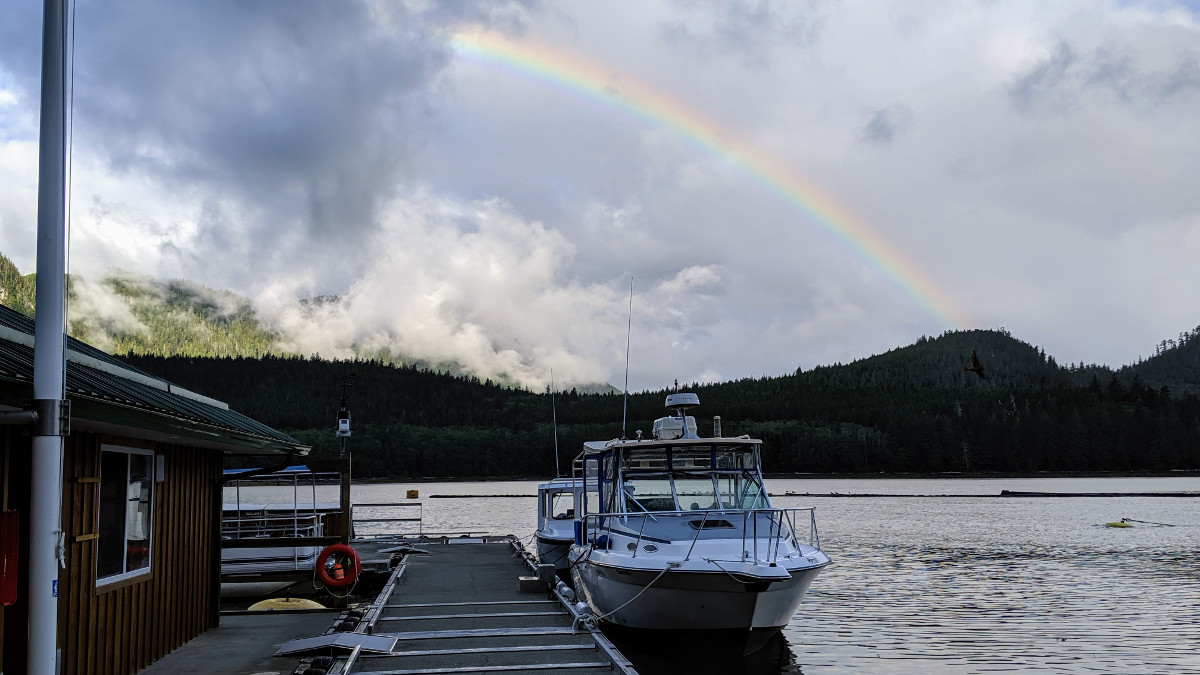 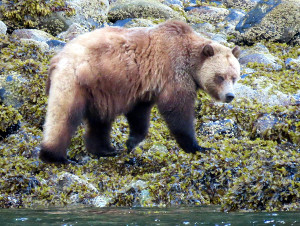 Our last day at Knight Inlet Lodge started with a rainbow over Glendale Cove. We joined another morning estuary tour, this time guided by Bryn. We did not find a pot of gold at the end of the rainbow, but we did find Cleo. She was rambling along the shoreline across from the lodge, flipping rocks in search of breakfast. It’s amazing to see these bears flip over huge rocks as if they weigh nothing. It gives you some perspective on their strength and agility. 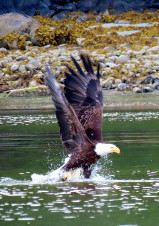 In addition to Cleo, we saw another bear eating barnacles off of the pilings. We also saw a number of birds, including a bald eagle fishing. It was quite successful in snatching a good sized fish from the water. If flew to the top of a piling and ate its well earned breakfast.

That final tour went by way too quickly. Before we knew it, we we on a float plane back to Campbell River. Of course we wish the trip to the lodge was longer, but we had a great time. Overall, we saw 9 brown bears: 6 adult females, 1 adult male and 2 yearlings (Lenore’s cubs). We were familiar with the bears’ names, and had seen lots of photos, but we were not able to identify them ourselves. This gave us a new appreciation for what we are trying to accomplish with the BearID Project.

We hope to visit Knight Inlet Lodge again. In the mean time we will be hard at work writing a paper on how far we have come as well as working to improve the application. Hopefully the next time we visit, our application will be able to identify all the bears we see.