How Do We Identify the Bears?

In the previous post, The Bears of Brooks River, we stipulated that the focus our project is the brown bears (Ursus arctos) of the Brooks River area of Katmai National Park.

Individual brown bears are difficult for us to identify, but according to Katmai National Park’s Brown Bear Frequently Asked Questions, “with practice anyone can identify the most commonly seen bears along the Brooks River.” The bears of Brooks River are not tagged or collared. Identifications are made through observations. Biologists maintain careful records of bear observations and use these to identify characteristics of individual bears every year. Rangers and biologists use a combination of physical characteristics, habit and disposition to identify individuals. Each identified bear is assigned a unique identification number.

There are a variety of characteristics used to identify bears. Some useful identification characteristics are described in the sections below (taken from Bears of Brooks River 2016 eBook). 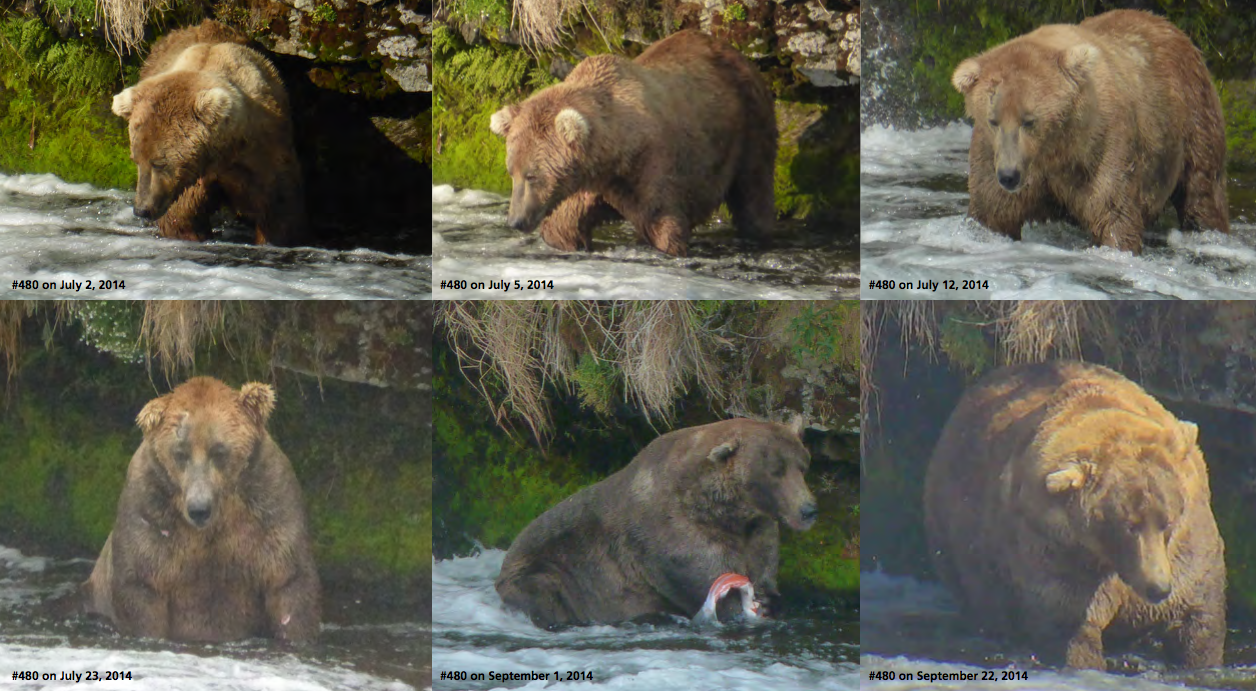 Body size and shape are useful identification characteristics, but bears grow rapidly from season to season and year to year. Seasonal variation can be seen in the image above which shows bear 480 Otis between July 2 and September 22, 2014. As you can see, 480’s shape and size varies greatly over this three month period. 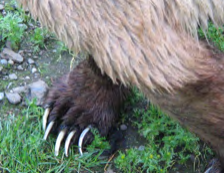 Most of Katmai’s bears have dark claws, but a few have lighter tan-tipped claws and some even have white claws (like 477 Sara in the image to the left).

The color of a bear’s fur or coat and the pattern it is shed is somewhat consistent from year to year, but it is important to place fur color within the context of the season and the bear’s relative age. A bear’s coat generally darkens as it grows from a cub into an adult bear. It also typically darkens from late summer to fall. A blondish bear in July may become dark brown by September.

Almost every bear carries a unique suite of scars and/or wounds. These are very useful for identification. However, wounds heal and a bear’s new fall coat can hide scars. Be mindful that not all bears can be identified from scars and wounds alone. 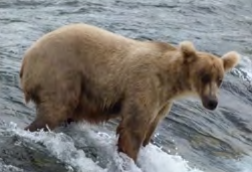 Bear ears come in a variety of colors, shapes, and sizes. Note if a bear’s ears are large or small, triangular or oval, upright or flopped over. Some bears are even missing all or part of an ear. Generally speaking, the ears on adults are more widely spaced than cubs and subadult bears. Some bears also have very light colored ears, even in the fall (128 Grazer, pictured at left, has distinctive, light colored ears).

Brown bears typically have dished-shaped faces (i.e. wide with a prominent brow ridge). Like humans though, each bear’s face is unique. Look closely at a bear’s face to note the shape of its muzzle and the relative position of its eyes. 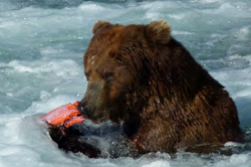 There are behaviors that all bears share, but not all bears do the same things in the same way. Some are aggressive towards other bears. They show other bears how dominant they are (the bear to the left, 747, is one of the more dominant bears). Others avoid confrontation and are more subordinate. Some bears are tolerant of people and others will avoid people at almost all costs. These behavioral characteristics are important differences between each bear.

Bears have an instinct to eat high calorie foods like salmon, but fishing is a learned behavior. Not all bears fish in the same way or in the same places. This offers great insight into their individuality.

Can We Train a Computer to Identify Bears?

It is clear that humans can not easily identify individual bears on sight alone. For practical purposes, our project will focus on identifying bears from photographs. This means we will not be able to incorporate behaviors as an identification factor. We can also see that many physical characteristics change dramatically, even across a single season. Perhaps with enough data, a computer can learn to distinguish individual bears using subtle variations we humans can not easily perceive.

Computers have already been trained to distinguish between bear species, dog breed and other similar categories through the use of training sets like ImageNet. Computers have also learned to be quite good at human facial recognition and even emotion recognition. There are also numerous projects for automated wildlife monitoring projects, such as those using Wildbook.

These projects, along with other deep learning and computer vision advancements, lead us to believe bear identification is possible. In the coming posts we will explore some of these projects and begin to develop our own strategy.